Rubble to park: recycling the landscape on Governors Island

Mayor Bloomberg recently announced a new city park, The Hills, located on Governors Island. This new park feature, made of recycled remnants of a seven-story military building imploded in June, will add eleven acres of green space to Governors Island. The Hills will rise 25 to 80 feet above sea level, with the highest summit featuring 360-degree panorama views of the Statue of Liberty, New York Harbor, and the Lower Manhattan skyline. This attraction is scheduled to open to the public in the spring of 2015. 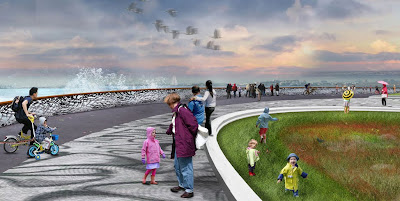 The Hills consists of four mounds:

1. Grassy Hill: a 25 feet high gentle slope with views of the island’s new and historic landscapes and the Manhattan skyline.

3. Discovery Hill: 60 feet, with a blending of nature and art along its pathways.

4. Outlook Hill: the towering 80 feet hill with grand scenic views of the Statue of Liberty and New York Harbor.

The $70 million construction cost of The Hills is to be privately funded. To date, $36 million has been committed from individuals and foundations to meet the construction cost; Google’s Eric Schmidt and his wife Wendy donated $15 million, and leadership gifts were pledged by Bloomberg Philanthropies, the Carson Family Charitable Trust, Charina Endowment Fund, The Lauder Foundation, Joan H. Tisch and Family, and the Tiffany & Co. Foundation.

The views provided by The Hills are bound to attract visitors. However, the benefits of the project aren’t just its allure and recreational qualities. As landscape architect Adriaan Geuze says, “We had an idea that it was absolutely necessary to lift the level of the island above the flood levels”; the Hills collaborates with the city’s efforts to combat climate change’s rising sea level and extreme weather by building resiliently.

Philanthropist Wendy Schmidt believes The Hills, in addition to protection, serves another purpose; “… a beautiful fortification that protects New York Harbor and will be a new vision for the new century.” The project symbolizes an environmental rebirth of New York City by addressing the increasing awareness of environmental issues while incorporating a new environmental direction of sustainability and resilience in New York City.

For a lively discussion on the idea, see the comments on the Governor’s Island website. 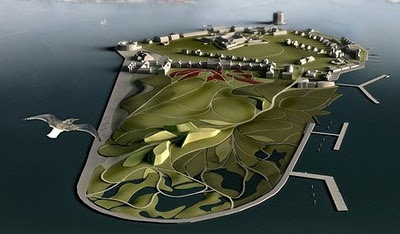