Nature at work on its own timetable: the cicadas are coming! Every seventeen years, billions of Brood II cicadas emerge from underground, where they have been feasting on tree root xylem fluids in preparation for their spring Dionysus festival of molting, mating, and noise-making. For the next four to six weeks, prepare for lots of bugs and a constant 7kHz mating buzzzzzz. 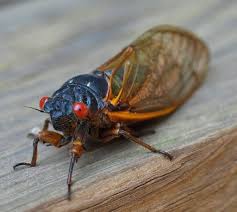 These harmless cicadas who are about to swarm the East Coast have been underground since 1996–the same year that brought us $1.22 gas prices, the divorce of Prince Charles and Lady Di, the Atlanta Summer Olympics, and the Spice Girls first number one hit “Wannabe.”

Why now? The cicada nymphs only emerge from the ground when the soil is 64 degrees or warmer, eight inches down. New York Public Radio has created a map showing ground warmth to see where the cicadas will appear. Look at that dark orange dot right over New York City…!

If you see cicadas in your neighborhood, you can report them to the Magicicada Mapping Project, a National Geographic supported initiative. According to their website, cicadas have been spotted from Pennsylvania to Georgia. If you aren’t sure if the black-bodied, red-eyed large bugs suddenly swarming your apartment are cicadas or not, here is a (terrifying) cicada gif to compare to:

What to do about the impending swarm? If you can’t beat ’em, eat ’em! According to the Cicada Invasion blog, cicadas are a rich source of protein with about the same amount per pound as red meat. Cicadas are also said to be full of vitamins and minerals, low in fat, and they have zero carbs. Jenna Jadin wrote a cicada cookbook in 2004 that features recipes for Soft-Shelled Cicadas, Cicada Rhubarb Pie, and El Chirper Tacos, among many others.

As Jadin explained to Radiolab, “Cicadas are really, really easy to catch. They just sit there. They don’t have any defensive mechanisms.” The best time to harvest cicadas for cooking is when they first appear, as that’s when they’re the most succulent. “They’re a grub basically. They haven’t formed their exoskeleton yet. They haven’t hardened. Wings haven’t unfurled,” said Jadin.

If you want to try cooking some cicadas at home, first boil them for four to five minutes to remove soil particles that can be harmful. Then you can freeze them, roast them, which gives a nutty flavor,or start on any of the dozens of recipes popping up all over the internet. If you have shellfish allergies, be cautious because cicada exoskeletons have the same materials as many shellfish.

A glimpse of the High Bridge suggests it was fated to become a fashion runway one day.