Book review: The City and The Coming Climate

New York has persevered through two heat waves so far in summer 2013, including a day that broke the Con Ed record for peak energy use. When will we experience the next heat wave and how bad will it be?

The City and the Coming Climate: Climate Change in the Places We Live by Brian Stone, Jr 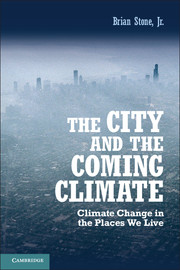 New York City was hit with its first 2013 heat wave, a period of three or more consecutive days with temperature highs in the 90s, on July 6th. A week later, New York faced a second seven-day heat wave.

Extreme heat events have increased in frequency by more than 100% in just 50 years, influenced by a comparatively small increase in the planet’s average temperature, of only about 1.4 degrees Fahrenheit. Climate models have consistently, and accurately, predicted increased frequency of heat waves, driven by an increase in atmospheric CO2, which causes gradual planetary warming, which then changes circulation patterns and disrupts the familiar weather systems of the past.

Heat waves are one of the predicted weather extremes that are already having an impact here in New York. Looking ahead, the City’s own projections show that our local climate is expected to approach that of present-day Birmingham, Alabama, over the course of the next 40 years, and extended hot weather is a major concern described throughout the Special Initiative on Rebuilding and Resiliency report.

Brian Stone Jr. is an Associate Professor in the School of City and Regional Planning at the Georgia Institute of Technology. His research focuses on climate change at the urban scale. In his book The City and the Coming Climate: Climate Change in the Places We Live, Stone explains how land surface alterations can produce effects that dramatically reinforce climate impacts. He then advocates for policy changes that include improved urban planning as a way to bring relief to overheated cities.

This phenomenon is easy to see in the lab experiment below — CO2 is transparent to visible light, but absorbs infrared:

The trapped heat warms the Earth (either land or ocean). Stone’s essential point: by changing the heat properties of our own land alterations (like the surfaces of our cities), we can offset the warming effect of added CO2, to some extent.

Land surfaces that are more reflective, like ice, bounce a lot of the sunlight striking them. The reflected light escapes the Earth, without heating the surface, and being in the visible spectrum, without being absorbed by atmospheric greenhouse gases.

Climate change itself is changing reflectivity in ways that we don’t want by reducing the surface area of glaciers when they melt. Fewer glaciers reflect less light, trapping more heat; creating a positive feedback loop that contributes to the melting of even more glaciers.

Sea ice in the Arctic is in a similar loop. As the polar ice cap shrinks it leaves dark open ocean, which absorbs more energy from the sun and helps to accelerate the melting of the remaining ice. A description of the polar ice is here, from NASA:

And changes tracked over time, here:

While we can’t control ice areas, the design of our cities is up to us.

As our population grows, and cities expand, Stone points out that landscapes will be increasingly altered. Without forethought, these alterations will create more dark surfaces, collecting more heat from sunlight, resulting in more heat being trapped in the atmosphere and broadly rising temperatures.

The next land surface property that Stone describes is heat energy, which takes three forms in our cities. The first is thermal-infrared radiation, the re-emission of radiation as long wave radiation, for example “…warming our hands by a campfire.” The second method is sensible heat via the process of convection. And third, is latent heat, which is trapped in water, then evaporated high into the atmosphere and which results in less heat increases.

These two land surface properties, albedo and heat energy, contribute to the city’s amplification of heat waves. The urban heat island effect is one outcome: “because of the greater prevalence of mineral-based building materials, such as stone, slate, concrete, and asphalt, cities absorb and retain substantially more heat than rural areas characterized by more vegetative cover.”

Other factors include less evaporative cooling due to fewer trees, reabsorbed reflected radiation from other buildings, and the heat from cars, air conditioners, computers, and factories, which each produce “waste heat.” Consider every taxi, truck, bus or car on a packed stretch of 34th Street as a heat source, and one can appreciate how much waste heat a busy city creates.

Cities can have such a large influence over temperatures that “urbanization elevates temperatures in large cities by a range of 2 to 10 degrees Fahrenheit, with maximum heat islands measured to be in excess of 20 degrees Fahrenheit.” Stone used his study’s comparison of urban and rural temperature anomalies to conclude that “in cities, land-use change and waste-heat emissions are playing a more significant role in ongoing warming trends than greenhouse gas emissions” as represented by the greater vertical distance between urban and rural anomalies than the vertical distance between the zero anomaly and rural anomaly lines. 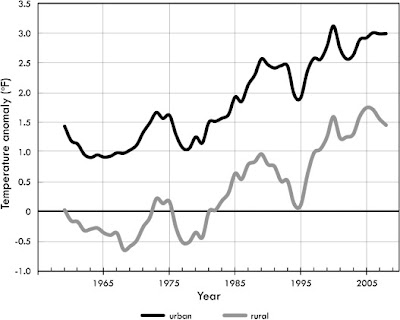 Stone’s research in how land surface changes contribute more to climate change than greenhouse gas emissions leads him to advocate for a stronger focus on landscape surface changes. In other words — there is a way to design cooler cities for the future.

He advises an increase in the number of trees (bringing both shade and evaporative cooling), increasing albedo surfaces (as in the NYC Cool Roofs program, which paints rooftops white to reflect heat), and limiting sources of waste heat.

Trees are heroes, and here New York City is already lucky. Trees have low energy intensities, are proven to help cut electricity costs and pollution control costs, increase property values, improve air quality, and sequester carbon; according to Stone, “the annual benefits of urban trees have been found to exceed costs by a factor of 1.4 to 3.1.”

Rooftop gardens have also proved to be effective. A study in Toronto found that “greening of just 5% of that city’s area in the form of roof gardens lowered temperatures by almost one degree Fahrenheit.”

Stone defines ‘greenbelting’ as the protecting of forest and natural covers to cities. Greenbelts are important because they are conducive to regional moisture retention and evaporative cooling. These processes, although occurring outside but nearby cities, can help to decrease the frequency of extreme heat in the urban center.

The last method advised by Stone involves waste heat. In Manhattan, “the total quantity of waste heat released from buildings, industry, and vehicles exceeds the quantity of absorbed solar energy released as sensible heat from the Earth’s surface.”

Most comes from vehicle traffic; during the summer, vehicles are estimated to account for 50 percent to 60 percent of the total waste heat produced in the city. In the future — as soon as we can make it happen — waste heat can be reduced by using electric vehicles (like the Smith Electric delivery trucks you may see on occasion), and by increasing public transportation use.

Land-surface drivers contribute to climate change to a similar degree as greenhouse gases. This major factor of climate change must be addressed to ensure we are using efficiently using our resources to most effectively deter climate change.

2. Adopt the regional scale as the primary focus of scientific assessments of climate change.

Because landscapes vary across cities, regional scale climate change policies can be beneficial. These regional policies can be tailored to best suit the different characteristics of cities. Cities are more knowledgeable about how their climate is changing and how they are being affected, maintain more precise climate change data, and can determine how effective their climate strategies are.

Adaptive mitigation strategies are “defined as climate-management activities designed to reduce the global greenhouse effect, through the control of gaseous and/or landscape surface drivers, while producing regional climate-related benefits in the form of heat management, flood management, enhanced agricultural resilience, or other adaptive benefits.” These strategies target not just the drivers of climate change but also its effects, making them more viable for cities and its people to implement because of their dual purpose and cost effectiveness.

New York has persevered through two heat waves so far in summer 2013, including a day that broke the Con Ed record for peak energy use. When will we experience the next heat wave and how bad will it be? Britain, which was simultaneously enduring extreme heat, was not as fortunate as NYC. Recently reported in the Independent, Britain experienced at least six consecutive days with temperatures above 30 degrees Celsius. The extended hot weather caused at least 760 deaths, wildfire warnings, and the possibility of crop failures — and more extreme heat is forecast. Eastern and Central China has also been in the grip of a heat wave.

As noted in Mayor Bloomberg’s NYC Special Initiative for Rebuilding and Resiliency (SIRR) report released in June, heat waves are recognized as a primary threat to public health — and thankfully, under the mayor’s PlaNYC program, many aspects of Stone’s proposal are addressed already or understood. Through the planting of one million trees in NYC, and the Cool Roofs initiative, NYC is taking the right steps to change the city design to minimize heat effects. Faster adoption of electric vehicles, fewer heat-producing private cars, and even a mandate for green rooftops on new construction might also provide important summertime benefits. (We’re hoping for + Pool, too.)

But Stone’s book gives a vivid and specific sense of the urgency of the situation, if July didn’t just convince everyone. We’re going to read it again in February, if only to prepare ourselves for summer 2014.